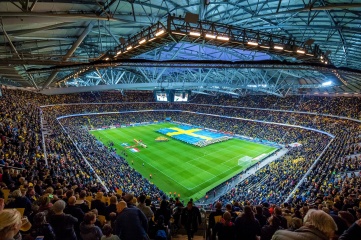 The final would take place at Friends Arena in Stockholm

France, Poland, Switzerland and Ukraine have also declared interest in UEFA Women's EURO 2025, with bid dossiers due by October 2022 and the host to be selected in December 2022

[Source: Nordic FAs] The Nordic countries bid for UEFA Women's EURO 2025 with a strong vision of involving and developing women’s football. Nordic values and sustainable development are the core power of the joint bid.

The Nordic football associations have worked closely together for four years to make a joint bid for a major championship. Now Denmark, Finland, Norway, and Sweden have announced their preliminary bid for the UEFA Women's EURO 2025 with support from the Faroe Islands and Iceland.

“Football is a powerful opportunity to make a change. Together with our Nordic allies we want to show the world through football we have a chance to enhance ethics, transparency and bright and diverse future of the sports”, says president of the Finnish Football Association, Ari Lahti.

In Denmark, they draw on experiences from EURO2020, where four matches were very successfully staged in Copenhagen.

In the last few years, the Nordic Football Associations have researched for stadiums, host cities, base camps, and other facilities to form the complete picture of how to develop the best possible host for the UEFA Women's EURO 2025. This work will continue until October 2022 when a final bid should be submitted.

In December 2022, UEFA's executive committee will announce the host of the UEFA Women's EURO 2025. If awarded to the Nordic team, it will be a spectacular final at Friends Arena in Stockholm – the largest stadium in the Nordic region with room for 50,000 spectators.

Karl-Erik Nilsson, President of the Swedish Football Association says: “All Nordic football associations agrees about the importance of organizing major championships in our countries, and together we have great ambitions for the development of women’s football. We know that a UEFA Women’s Euro in the Nordic countries will strengthen the women’s football, and become an unforgettable experience for both players and supporters.”

Jesper Møller, President of the Danish Football Association says: "The Nordic bid for UEFA Women's EURO 2025 is much more than a championship – it is a team work to ensure the continued development of women's football for more diversity across our common, Nordic visions and values. With EURO 2020 in fresh memory, where Denmark showed its event potential, we will reuse and refine all the good experiences. With a joint Nordic bid, we will display not just Denmark but the entire Nordic approach to women's football and innovative event management"

Lise Klaveness, President of Norway Football Association says: “UEFA Women's EURO 2025 in Norway and the Nordic countries will be a celebration of inclusion, tolerance, and community for all football fans at the stadiums and events in the hosting cities. The spectacle of the finals will be an integrated part of our strategy to strengthen the position of women and girls on and off the pitch in Norwegian football. Great progress has been made in Norway and internationally in recent years developing the women’s game where we are proud to be a pioneer. A Nordic UEFA Women's EURO 2025 tournament will be a powerful showcase for even greater impact and legacy.”