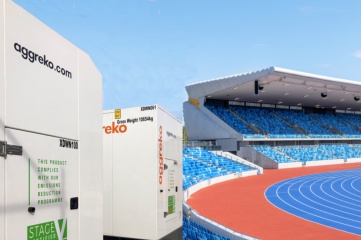 The fleet of temporary equipment powering the Birmingham 2022 Commonwealth Games has been unveiled, with over 120 items of kit tailored to help meet the host’s stringent environmental targets.

(Source: Aggreko) The Birmingham 2022 Commonwealth Games aims to make these the most sustainable Games yet. It is working closely with its partners, suppliers, and wider stakeholder to reduce its carbon footprint wherever possible.

Central to this is the way the event is powered and as energy is a key part of the Games’ carbon footprint, focus has been given to driving emissions down.

The Games are taking a ‘mains first’ approach, using the existing infrastructure from venues reducing reliance on additional generators, and where temporary energy is needed, working closely with Aggreko to drive emissions down.

As the Official Modular Energy Solutions Supporter for Birmingham 2022, Aggreko is responsible for planning the temporary energy framework for all 15 of the Games’ venues. These include large-scale venues such as Alexander Stadium and Coventry Stadium & Arena, to greenfield sites of regional parks like Warwick and Sutton. They are also powering additional requirements in sites key to the Games, including the Birmingham 2022 Villages in Birmingham and Warwick and the remote vehicle security site.

The generators will be operating in Load on Demand configuration, meaning they will replace a large, constantly operating generator with a group of smaller generators that can power up or down automatically according to demand onsite.

To support the generator set-up, Aggreko will be supplying several batteries at 300 kVA.  A specialist Y-Cube energy storage battery will be used in the fleet depot centre at the University of Birmingham to power the Games’ electric vehicles.

The generators and batteries will be used in tandem to aid carbon and fuel savings and at Victoria Park solar power will also be garnered in conjunction with the hybrid generators.

James Eade, Head of Energy for the Birmingham Commonwealth Games, says: “As a client we have been receptive and encouraged Aggreko to avail of innovation in power generation and to rethink established paradigms in this area. Collectively we have worked hard to ensure that nearly all the venues display some element of new technology or techniques.”

Robert Wells, Managing Director of Event Solutions at Aggreko, says: “While Aggreko is well-versed in the planning of temporary power for large-scale global events, we always strive to improve on every project we take on. As such, the entire business is whole-heartedly committed to its responsibility as Modular Energy Solutions Supporter, and its impact on the environment in 2022 and beyond.

“The sustainability conversation has of course been ongoing for some time, but now our latest Greener Upgrades programme enables us to easily advise customers on the small changes they can make to reduce harmful emissions and the use of fuel. For the Birmingham 2022 Commonwealth Games this means it can work to its goal of leaving a carbon neutral legacy, which we are incredibly proud to support.”