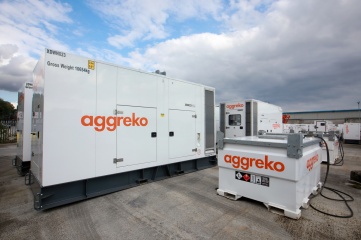 [Source: Aggreko] Aggreko has further confirmed its commitment to reaching net zero emissions by beginning the transition from diesel to greener fuel sources in its fuel management services.

The organisation’s ongoing phaseout is part of its pledge to cut the amount of the fossil fuel used by the organisation by 50% before 2030 and reduce local air quality emissions from its fleet by a similar figure. Specifically, Aggreko intends to phase out offering diesel with its fuel management services from April, instead solely providing hydrotreated vegetable oil (HVO).

The move is part of the global temporary equipment supplier’s ‘Greener Upgrades’ initiative, which also includes a multi-million-pound investment in new products and technologies, alongside alternative fuels.

Speaking on the switch, Chris Rason, Managing Director Aggreko Northern Europe, said: “The need to be sustainable has long shifted from a vague preference to an absolute priority for all businesses, and this sentiment continues to be reinforced through action.

“For example, at COP26, proposals have been floated to force UK firms how they will reach net zero targets set for 2050. However, despite this shift to a ‘prove it’ culture when it comes to decarbonisation, complacency and greenwashing sadly still remains at a time when organisations need to begin taking steps toward a greener future.

“It is for this reason why we have put great effort into developing efficient and sustainable technologies that can replace existing, polluting energy sources without disruption. This continued investment has allowed us to begin the transition from diesel to HVO for our fuel management systems, passing decarbonisation gains onto our customers while maintaining or improving equipment performance.”

Aggreko has previously trialled HVO as a ‘drop-in’ fuel in controlled conditions using its own generator fleet – a rarity in testing conditions – and demonstrated significant emissions benefits. Further scientific studies have also shown the fuel produces up to 90% less greenhouse emissions, including 33% lower levels of fine particulates compared to diesel. Alongside this, 30% less hydrocarbons and up to 9% fewer nitrogen oxides are produced, and the amount of polycylic aromatic hydrocarbons produced was also reduced.

“It cannot be doubted that the transition to net zero will be difficult for all organisations, regardless of their place in the supply chain, and there is no ‘one-size-fits-all’ solution,” Chris concludes. “However, this does not mean that businesses can stand still – far from it, in fact.

“By identifying areas in which pragmatic choices may be made for quick and effective sustainability gains, organisations can reduce the size of the challenge ahead. Opting for greener fuels is an excellent example of this, which is yet another reason why we have made this choice to transition our fuel management services onto HVO.”