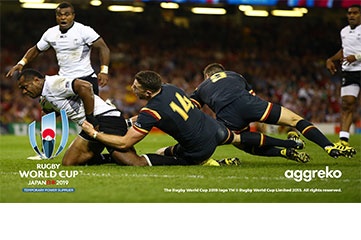 [Source: Aggreko, March 2019] Aggreko is proud to announce it will be providing critical power and distribution for the ninth Rugby World Cup, which takes place from 20 September to 2 November, in Japan. This will be the first time the tournament is to be held in Asia, providing a great showcase for the sport in the region and across the world.

The global leader in mobile, modular power, heating, cooling and energy services will supply the power to 12 venues spread across Japan, as well as the International Broadcast Centre that is responsible for providing the television coverage to millions of fans across the world.

Aggreko is tasked with all critical power systems and distribution for all broadcast activities, and Field of Play Backup Systems too. Venues are spread around the country, providing a logistical challenge, so Aggreko will ensure around 80 engineers will be on site to support the operations and logistics.

World Rugby Chairman Sir Bill Beaumont said: "We are delighted to welcome Aggreko as a supplier for Rugby World Cup 2019. The appointment of company with a proven track record in major events delivery to the tournament commercial family will further broaden the reach and profile of what is shaping-up to be the most popular Rugby World Cup ever with record ticket demand and the biggest-ever broadcast and digital media footprint."

“Aggreko are proud to be chosen to provide our critical services to such a global and prestigious event as Rugby World Cup 2019. We have ample experience handling the worlds’ biggest events, and the 2019 Rugby World Cup certainly falls under that category.” said Robert Wells, Managing Director, Aggreko Events Services.

Aggreko have been involved in some of the biggest events in the world, providing their services to the 2018 PyeongChang Winter Olympics, the 2018 Gold Coast Commonwealth Games and the 2018 Ryder Cup in Parisamong many.

Rugby World Cup 2019 is on track to be the event to attend in 2019 with unprecedented ticketing demand during the priority and public phases to date. Fans interested in attending Asia's first Rugby World Cup can find out more via the official website at www.rugbyworldcup.com/tickets, where tickets are currently on sale. The site also contains details of the official supporter tour and hospitality programmes.