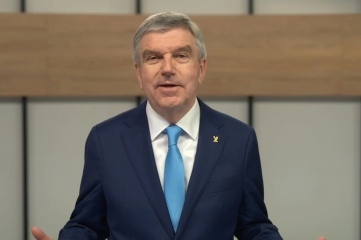 From delivering Beijing 2022 during the pandemic to the ramifications of Russia’s invasion of Ukraine, 2022 was a challenging year for the Olympic Movement – but according to President Bach, the IOC can nonetheless look ahead with “hope and optimism” in a year that includes qualifiers for Paris 2024, and the first Olympic Esports Week.

“The power of sport as a force for good in the world is widely acknowledged – and it is needed more than ever. Especially in a time when division and conflict is gaining ground over dialogue and cooperation – in a time, when, tragically, it is not people but the guns of war that are doing the talking,” said Bach in his New Year’s Message.

This year will highlight the achievements of athletes on the road to Paris 2024. “The Olympic Qualifier Season is ongoing and already now has generated over 100 million additional engagements across Olympic social media platforms – thereby promoting the athletes and their sports in new and exciting ways.

“Thanks to the great preparation by the Paris 2024 Organising Committee, we can look forward to Olympic Games of a new era: inspired by Olympic Agenda from start to finish. The Olympic Games Paris 2024 will be more inclusive, more youthful, more urban, more sustainable – and they will be the very first Olympic Games with full gender parity. And all of this in one of the most beautiful cities in the world," said Bach.

“This positive momentum is something that we can carry into the new year. Our values, our solidarity, our unity, our peace-mission – all this makes our beloved Olympic Movement so unique. This is the solid foundation on which we can build our future – on which we can build a better and more peaceful world through sport.”