Hammering down the road with Infront - Host City News

Home
»
News
»
Hammering down the road with Infront 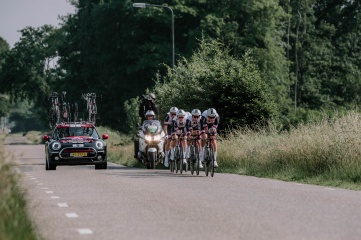 Host City: The Hammer Series is a great brand name – where did the name come from?

Julien Ternisien: The name was developed jointly by Infront and its partner Velon, the company uniting the top 11 UCI World Tour Teams, together with a leading London based agency.

We looked for a brand name that would immediately resonate with cyclists, reflect the race format and work internationally.

All serious cyclists know what it is to be hammering down the road or when a rider drops the hammer and then goes all out. It reflects the impact racing style of the series and translates well across many languages.

Host City: How does the format of the event differ from other cycling competitions?

The other important aspect is that it is short and action packed. It is two hours of racing per day over three days including the Hammer Climb, Hammer Sprint and Hammer Chase.

The Hammer Climb and Hammer Sprint are races in which riders will attempt to win points for their team. Fans are able to see the top riders in the world sprinting against each other on each lap – approximately 10 times – during the Hammer Climb and Sprint.

Each team’s finishing positions from days one and two are combined to determine their starting place on day three’s Hammer Chase, a team pursuit against the clock with the leading team starting first and the other team chasing them.

Host City: Who is the rights holder to Hammer Series and what is Infront’s role in delivering the event?

Julien Ternisien: Velon Ltd and Infront are the rights holders of the series, partnering with local race organisers on the events.

Host City: The event is part of the UCI Europe tour - what is your relationship with the UCI and how do you help to further their aims?

Julien Ternisien: Both Infront and Velon have a strong relationship with the UCI and we see them as our partner in the development of the Hammer Series

We have engaged with the UCI from the outside and have worked closely with them on the development of the format and the regulations necessary to facilitate this new form of racing.

All Hammer races, as well as the series, are sanctioned by the UCI.

We believe the Hammer Series is a fantastic race series for the globalisation of cycling, which is a key objective of the UCI. This new format of short form, action packed racing offers a unique opportunity to introduce cycling to new cycling markets.