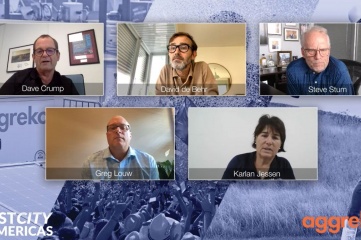 On the opening panel, Innovation, Technology and Sustainability in Major Events, the consensus was that technology is undoubtedly creating amazing opportunities – but humanity must come first.

Al Kidd, CEO & President, Sports Events & Tourism Association (Sports ETA) said : “You have a huge shift that tech has been able to impart. You’ve got chips in bats and balls. I’m amazed at how many dozens of tech companies are being formed every day. This shift is transformational at all levels.”

Abe Stein, Head of Innovation, Sports Innovation Lab said: "We need to think of AI and big data as a way to modernise our venues through infrastructure. But tech should be in service of our humanity. If it's not helping us, why do we have it in the first place? All data, starting at collecting, has perspective and position. We can get so excited about tech and data that we lose sight of ourselves.”

Cecilia J. Folz, Founder and CEO, CFC Collective said: “Sometimes you need to just do what you think is right – tech and data is important, but don’t lose sight of that gut instinct.”

Andy Meikle, Founder and CEO, Recast said: “We need to think about the way in which we are able to give fans access to content. The ad model is lucrative for a few tech giants, but the subscription model limits reach.

“We are addressing the issue that many people cannot legally access content because they can’t afford to do that. We need to be able to give fans what they want when they want.”

Debra Gawrych, Secretary General, International Federation of Sport Climbing said: “There’s more to the sport than just the event. People are eager to know what’s going on behind the scenes. They want athlete profiles and interviews. They are hungry for detail – not just surface soundbites.”

Marcus Luer, CEO, Total Sports Asia challenged the topic of the panel, saying “I’m not sure media tech should be designed to meet the demands of fans, but the other way round. No one needed TikTok – we lived our lives without it, but someone designed it and it’s been hugely successful.”

In the panel on The Convergence of Sports and Esports, Gabriel Q. Chan, Director of Communications, Global Esports Federation highlighted the Commonwealth Esports Championships that will run concurrently with the Commonwealth Games in Birmingham in less than 40 days’ time.

“Players will have the opportunity to represent the country on the international stage; this opens up new opportunities,” he said.

Beng Choo Low, Secretary General of the World Baseball Softball Confederation said that Esports and traditional sports will not totally converge. “You will reach a stage where esports is another discipline, like softball or baseball, as part of all the other so-called traditional sports. Yes, you’re online, but there’s also a physical element to it. Athletes like to meet not just online; there must be some physical interaction.”

Yao Williams‎, VP, Global Brand Partnerships, ESL Gaming said the future is mobile. “At ESL we are very bullish on mobile. There are more people with smartphones than PCs or consoles. When with think about global growth we think about Indonesia, India and Africa.”

Ian Verchere, Co-founder and CEO, Session Games highlighted how esports can learn about commercial partnerships from the experience of sports events. “The presence of brands in sport is authentic in the way it might not be in Dota or one of those fantasy-based games. Working with a governing body gives you that legitimacy to go in and open doors that wouldn’t necessarily be open if you just went in as a gamer.”

“We are always innovating,” said Chan. “The key is to keep engaging with our community – publishers, gamers, fans and young people. There are so many opportunities – the metaverse is a new frontier; how can we tap into that to grow esports to a whole new level?”

The panel was moderated by Matt Traub, Managing Editor, SportsTravel.

World record-breaking gamer and content creator Callum Knight, also known as @seapeekay, said in a Q&A: “We are seeing a massive increase in people getting opportunities in the mainstream. Content creators have their own TV shows, or they are getting chosen for Strictly. We are seeing YouTubers turning into million-record selling artists. We are raw and unpolished, but if you want to take opportunities there’s a lot you can do."

It was fascinating to hear from three very different events: a major one-off event; a fixed and recurrent event; and a major production company regularly touring with massive equipment, on the tension between the value of achieving sustainability goals versus the cost of the goal.

Audiences expect complex, large-scale productions instead of simple, spectator events and balancing sustainability goals with demand for bigger shows is difficult. Perfect solutions may not yet exist to all the challenges, but commitment to sustainability and energy transition means starting with something – exploring solutions, technologies and pilot schemes and sharing the results with other event organisers.

Speaking on the panel Fostering Impact, Legacy and DEI through Major Events, Cindy Medynski, Director of Edmonton Events said they are looking for event partners that have similar values and that align with their community goals. “It’s important that our stakeholders are buying local. It has to be a win-win for both sides of the coin.”

She also highlighted that Edmonton has the second highest indigenous population in Canada. ”It’s important for them to be at the table from the beginning and for us to be educated on how to incorporate them.”

Sarah Lewis OBE OLY said: “Sustainability, inclusion and DEI are part of the DNA of the event – that’s a win win win for everyone involved: for the value of the event, for the local community and the global community. We’ve got to be a diverse society, to respect and do things in a sustainable way - or the planet unfortunately won’t have the capacity to handle things anymore.”

Kathryn Schloessman, President & CEO, Los Angeles Sport & Entertainment Commission also highlighted the growing importance of community events for host cities. “If we’re not engaging our local community, our local businesses and our non-profits, and creating opportunities for our kids then we have failed.” She also stressed that these values are just as important for private and philanthropic funders of major events.

“Legacy is more than a buzzword, said Tania Braga, Head of Olympic Games Impact and Legacy, International Olympic Committee. “It’s part of why hosts have the Olympic Games; it’s about creating lasting benefits for the people of the host territory and the sports movement.

“Legacy is a living thing – it keeps evolving. We can still find educational programmes that exist many decades after the Games.”

She also highlighted the “very clear challenge” of climate change, and the Olympic movement’s “firm commitment” to be climate positive by 2030.

The panel was moderated by John Siner, Founder and Owner, Why Sport Matters.

There are so many layers to event hosting and part of that is about learning how to live and work together and understanding different cultures and communities.

Event hosting can also offer tangible benefits. Tim Briercliffe of AIPH, the International Association of Horticultural Producers highlighted the benefits of hosting a horticultural expo, including the lasting legacy of a beautiful city park.

The final panel, Summing Up: Prove Your Value, explored how right holders are structuring their financial models, monetising their rights and using technology to demonstrate the value of their brands and the importance of data analytics and DEI criteria for hosts and events to show their impact with credibility.

Matt Pound, Managing Director, World Table Tennis stressed the importance of staying relevant for traditional sports. “We need to offer people a product that’s worth their hard-earned cash, as the cost of living is going up. Table tennis is now competing with Netflix, with Candy Crush, with a Taylor Swift concert, with so many things. Do we need dancers, singers, light shows and entertainment to entice people to watch your sport? We’ve shortened our sessions so people can be entertained in a short, sharp experience.”

Gauging the impact of events is of growing importance for all stakeholders. “We are seeing more scrutiny of engagement of audiences rather than just volume,” said Mihir Warty, Chief Strategy Officer, World Rugby. “The world has moved on, looking at value and not just number of tweets and Facebook likes. That’s something we’ve got better at interpreting”. One barrier to change is the number of federations all trying to do similar things in terms of the explosion of digital and data opportunities. “Accessing skills is a real challenge”.

Babacar Djileh Dieng, Member of the IOC’s Digital & Technology Commission, joined the conference from Senegal, where the 2026 Youth Olympic Games (YOG) will be hosted. “People say the YOG are the laboratory of the Olympic brand, but with every event you are trying to improve it. Every Games is the laboratory for the next one!”

The panel was moderated by Robert Livingstone, founder of GamesBids.com.

John Harper, Chief Operating Officer, LA 28 Olympic & Paralympic Games gave an excellent presentation followed by a fireside chat, which gave a great sense of the excitement around the LA 28 programme. They set out to create an unparalleled Olympic and Paralympic experience for athletes, fans, partners, and the community. Harper outlined plans to celebrate the multi-faceted city of LA, a determination to fit the games around Los Angeles and a focus on creating a human legacy.

Host City’s Ben Avison also interviewed Colin Smith, Chief Tournaments & Events Officer, FIFA about the preparations for 2022 FIFA World Cup taking place later in the year in Qatar. He highlighted how the first World Cup taking place in the football-mad Arab world is important for the development of football, expanding its horizon and sharing the sport with the wider world.

The venues are available and ready well ahead of time and already in use for test matches, which allows for valuable early planning time. He also stressed the importance of the condensed match schedule, taking place over 28 days – and the celebrations that will happen in Qatar’s compact location.

Gianna Cunazza, CEO and Juan Carlos Chamy, CMO & CCO of the Santiago 2023 Pan American Games Organizing Committee gave a valuable update on preparations for the Games. The event is ready to gather more than 9,000 athletes in the biggest sports event of the Americas in the next year. "We believe in the social role of sports, so we are working hard to leave a sporting and social legacy for the whole country," they said.

Massimo Marinelli, Board Director of sports, media and tech investment company Aser Ventures also gave a fascinating interview. He said sports is a great industry to be in because it continues to be an industry of wins and performances, and that the sports industry will be more sustainable if it continues to create opportunities for investment. He also highlighted the importance of Leeds United’s partnership with San Francisco 49ers, and revealed that the expansion their Elland Road ground is back under discussion.

In his closing remarks with Adam Soroka, Avison highlighted the importance of diversity and diversification for major events in the years to come, which are likely to be characterized by financial, social and environmental considerations.