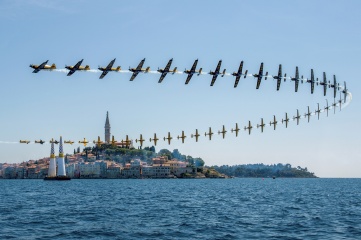 Staging events away from urban venues can create memorable spectator experiences – but only with a consistent power supply, which is exactly what Aggreko brings to Red Bull Air Race, Cirque du Soleil and the America’s Cup

Some of the most prestigious sports events in the world take place not in city centres or in purpose built stadiums, but on beautiful beaches, harbours and green field sites.
The host location of the America’s Cup is determined by sporting factors rather than the availability of electricity. Red Bull Air Race, one of world’s fastest growing international sporting events, also makes use of non-urban locations.
But thanks to modern technology, events like these can now provide the same level of broadcasting and hospitality as any city-based event.

Giving Red Bull consistency
According to David de Behr, Head of Global Events at Aggreko – the leading provider of mobile, modular power – the Red Bull Air Race was identified as a growing flagship event where there was an opportunity to integrate early and provide support.
Discussions between Aggreko and Red Bull Air Race began in 2014 and the companies quickly found a lot of connection points. By 2015, Aggreko was working on four races with Red Bull, one of which was on a beautiful beach site at Rovinj in Croatia.
“This was not easy, because they put giant screens on pontoons on the water for people on the beach to watch,” de Behr tells Host City.
“It was also a very large area to cope with, because the temporary airport is always quite a long way from the public.”
Organisers needed to be able to rely on the power supply but the local grid couldn’t meet the high capacity and reliability needed for the event.
“It’s all about consistency and reliability,” says Kevin Brownhill, Head of Partnership and Sponsorship at Aggreko Global Events.
“We worked closely with Red Bull Air Race to provide the consistency they need. Not in terms of deliverables – because that is a given with us, regardless of what we are powering whether over water or in an isolated green field site, or a small or large event – it’s about giving them peace of mind. They know we are there for them.”
Mike Hoeshl, Head of Production at Red Bull Air Race tells Host City why Aggreko was selected to power the series.
“The Red Bull Air Race World Championship is a fast-paced, low altitude race travelling all over the world to thousands of fans. Aggreko helps us to get to this point by supplying all of special energy solutions in a high quality and professional way.”
“We are guaranteed the same level of service for all of our temporary power solutions all over the world, which is the reason why we have selected Aggreko as official power supplier of the Red Bull Air Race.”

Powering new markets
After successfully partnering on four events in 2015, Red Bull Air Race has renewed its agreement with Aggreko for 2016 and the company is now providing power for the whole tour.
“We have major power projects in various places around the world, some supporting the national grid and some providing emergency power,” says David.
“Japan, where we provide industrial power after the Fukushima disaster, is a relatively young market for us, but it provided an ideal opportunity to power Red Bull using the local businesses. Red Bull in Japan gets a turnkey design package, which Aggreko in Japan can prepare well in advance. This is where local expertise comes into its own, like bringing equipment through customs, for instance.”
The advantages for Aggreko of taking its events business to new markets outweigh any difficulties. “Although we currently don’t have a large events business in Japan, what we do have provides great opportunities for the events that are coming up there, such as the Olympic Games, the Rugby World Cup and the Japan leg of the America’s Cup,” said Brownhill.
“The events market is growing throughout Asia, so our experience of major events elsewhere, together with the power projects we are doing in Asia, lets everyone see that we know what we’re doing and what it’s like to work with us.”
One of the challenges in Asia is changing the mind-set from buying power assets to renting, says de Behr. “Renting is a win-win solution for all concerned, and Red Bull helps us get that message across”.

Cirque du Soleil
Aggreko also provides power and HVAC for the world’s largest touring circus.
“When looking for power solutions, we look to obtain highest standard of quality at the lowest operational cost,” says Janick Wolput, Vice President of Touring Shows at Cirque du Soleil.
“The comfort of our patrons and the efficiency of our operations are at the heart of our approach. Cirque du Soleil believes that Aggreko is able to deliver the best global rental power and HVAC solution for its touring shows.”

Sailing towards Bermuda
Aggreko has been involved in another high profile event, the America’s Cup, since it was held in San Francisco in 2013. Aggreko also delivered an America’s Cup World Series event for the organiser TEAMORIGIN in Portsmouth in 2015 and has signed a contract to do this again in 2016.
“When it was announced that Portsmouth was going to stage it in 2016 and when Ben Ainslie became involved, as a UK company we were keen to be involved,” says Brownhill.
Jeremy Troughton, Operations Director, Louis Vuitton America’s Cup World Series Portsmouth tells Host City: “This will be our second year working with Aggreko as the official supplier of power and temperature control for the Louis Vuitton America’s Cup World Series Portsmouth.
“Their pre-event planning, working with us and every supplier that required power on site, is unrivalled and their delivery when it came to the event itself took the pressure of the event team in delivering these essential services. Aggreko are essential to enable us to deliver a successful event and it great to know we are in safe hands once again and we are looking forward to building on the great relationship we started at last year’s event”.
Aggreko now is now looking ahead to the America’s Cup in 2017 in Bermuda. “It’s not just about power though. The teams need air conditioning, as well as power, for the old naval base where they are based for 18 months leading up to the final set of races in 2017,” says Brownhill.

High flying hospitality
The high level of hospitality at Red Bull Air Race and America’s Cup is another benefit of partnering with these events.
“The hospitality the Red Bull Air Race offers is very similar to Formula One type level of hospitality, with some very well-known faces there,” says Brownhill.
“We can bring guests from other parts of our events business that we are looking to try and do business with; and part of our relationship with Red Bull is that we can take them back of house and show them what we do.”
The America’s Cup offers an incredibly high level of hospitality. “It was really quite spectacular; you are literally on the sea front facing the racing; it’s a great thing for us to be involved in and very high profile.”

The power to engage audiences
And when there is no immediate action taking place, a reliable power supply enables constant audience engagement. “People tend to think just of the centrepiece action at events, but there is so much more besides,” says Brownhill.
“The America’s Cup hosted evening concerts last year, and there are stunt performances that take place right over the crowd in the Red Bull Air Race that also need power.”
Ensuring broadcasters have the power capacity they need is also a crucial part of Aggreko’s remit. “Social media is becoming ever more important and broadcasters now cover events in a variety of different ways,” said de Behr.
“We provide broadcast power to ensure all types of media are catered for. Red Bull is especially creative and strong in this area.”