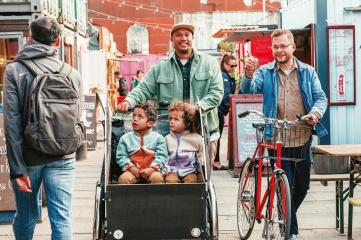 Events can be a strong driver for change, and the Danish capital strives to use events to increase both political and public focus on sustainable solutions like cycling and a more inclusive way of life

The rain is pouring down, the asphalt is wet, yet the crowds seem unfazed as they cheer on Jonas Vingegaard, Tadej Pogacar and the rest of the Tour de France riders blazing through the 13 km time trial cutting corners on Copenhagen’s slippery streets.
This day is a battle amongst the fastest and fiercest riders in the world, but it is not only a celebration of raw power and the cycling elite. It is also a tribute to the everyday cyclists riding their bikes through the same streets, the changing seasons, and the predictably mischievous weather. The people who choose the bike when they go to school, to work or on new adventures exploring the nearly 400 km bike lanes in the Danish capital.
“For us hosting Tour de France – Grand Départ had to be about more than sport,” says Lars Vallentin Christensen, senior manager at Wonderful Copenhagen. “It was also the perfect opportunity to promote cycling and get even more people out of cars and onto bikes, just as we wanted to show the world why it makes sense to invest in bike infrastructure. It is better for the climate, for making cities more liveable and for public health. And Tour de France was a great catalyst to push this agenda.”
This year’s Grand Départ was far from the first time Copenhagen has benefitted from events functioning as a driver for a development. Last year’s EURO2020 had a large program not least focusing on getting girls to play football and to strengthen inclusivity towards the LGBTIQ community within the football clubs. And the overall focus of sport and football being for everyone.

Keep Copenhagen in the yellow jersey of everyday biking
Copenhagen ranks as the most bike friendly city in the world, with around half the population commuting to school and work by bike. The city is connected by beautiful bike bridges and The Guardian just recently described Copenhagen as the first city it had been pleasant to cycle in.
Still, less people choose the bike than just a few years ago and especially the younger generation get around using other means of transportation. An unfortunate development, which is not easily turned around. For Denmark, Tour de France was the perfect opportunity to promote cycling – both to the world and the many polluted, congested cities. But not least to the Danes, to ensure that future generations will continue cycling.
“Hosting major events can do a lot for a city or nation. If the circumstances are in place, and the event is planned well, it can drive huge social, economic, and environmental impact. Moreover, you can demonstrate these objectives for an international audience, not just talk about it,” says Lars Lundov, Chief Executive, Sport Event Denmark.
“We experienced it most recently with the 2022 Grand Depart Tour de France in Copenhagen and across our nation. Enthusiasm and support among the Danes were impressive and largely helped to create a huge success during the five days in Denmark.”
Hosting the Grand Départ in Copenhagen was born out of the idea that the best bike city should welcome the biggest cycle race in the world; celebrating both Wout van Aert and the everyday bike heroes who choose the healthy, green, and non-congesting way to travel the city.
This dual focus on both sport and everyday life carried the essence of the Danish Tour-start and was an easy fit as Danes not only loves cycling as a pastime and mean of transportation, they also have a very strong passion for the Tour de France. As a matter of fact, Danes watch the most Tour de France per capita of any nation. The famous race to Paris is actual more popular in Denmark than in France herself. And these numbers are even from before this year’s extreme popularity with both three stages in Denmark, four Danish stage wins and of course and overall Danish winner.
“The Grand Départ in Copenhagen and Denmark was major spectator success. First the riders were welcomed in Tivoli by like rock stars by cheering fans and when the actual race started, roads were packed to an unseen degree. One actual challenge was, that there were people everywhere making the rider’s options for natural relief more than scarce”, says Vallentin.

Everyone was invited to have a tour experience
In Copenhagen, the focus on both elite and everyday cycling manifested itself with 140 side events counting from 100 days before the race. These included bike races for children, just as new school material was developed; teaching children about Tour de France, cycling as a sport and not least Denmark’s traditions for everyday cycling and how riding a bike is good for both climate and health.
Most notably the entire city was invited to join the Tour de Copenhagen and ride the trails of their sporting heroes on the day after the first stage. As the peloton moved on to Roskilde and stage two, the roads of the time trial course were not reopened for cars until later in the day, with the barriers and city dressing left standing. Allowing the everyday cyclists, a taste of Tour.
The Tour de Copenhagen first unleashed the local cycling clubs to ride the course at full speed, so they could test their abilities against Yves Lampaerts winning time, before a long parade of everyday cyclists, kids and their parents and cargo bikes with elderlies toured the course and had their unique Tour de France experience.
During the three stages in Denmark, Copenhagen also hosted a bike festival close to the route, where families and bike enthusiasts could watch the stages and engage in a variety of cycling oriented activities, making the Grand Départ a true celebration for everyone to partake in.

Year of the bike
On a national scale the final 100 days before the Grand Départ were packed with more than 700 side events all over Denmark, and the ministry of transportation declared 2022 to be the year of the bike, boosting cycling infrastructure with an EUR 400m investment.
These side events included closing down one of Denmark’s major traffic corridors, the Great Belt Bridge, so that it was possible to organise a bike race, allowing normal sport cyclist to cross the 17 km bridge, which was a highlight of Tour de France in Denmark and normally only for cars.
Residents at a hospice near Vejle knitted a giant 600kg yellow jersey, which was raised along the route. Several hospice patients called it therapeutic and said that it was nice to be part of Tour de France in Denmark and leave their mark, even though they wouldn’t live to experience it themselves.
And of course, the strong focus on the male elite couldn’t stand alone, and just month after Mads Pedersen and Magnus Cort had battled the Tour peloton in Denmark, the world’s elite was ones again welcomed to start a race in Copenhagen. This time it was for the Tour of Scandinavia – Battle of the North.
“It was amazing to also welcome the Women’s WorldTour and to see the many spectators who cheered them along. And of course, it was great to see, that just like Jonas Vingegaard brought back the yellow jersey from Paris, Cecilia Uttrup Ludvig took the overall victory in Tour of Scandinavia, highlighting the strength and depth of Danish cycling right now,” says Vallentin.

A grand platform for sharing
For Copenhagen the year event was a very strong platform for sharing some of the city’s best solutions for creating a liveable city, which is pleasant to be in and not least to move around in.
Copenhagen’s bike infrastructure is second to none and for years it has been a priority to put bikes before cars creating an efficient and safe network of routes getting more people on bikes. This focus has been very successful and today the many bikes is the first thing coming to mind, when visitors are asked what they notice in Copenhagen.
Because of the added attention created by Tour de France media from all over the world came to experience the world’s most bike friendly city, thus getting inspired to promote cycling and maybe bring some of our solutions back to London, Rome, and Paris.
“It is part of our part of our mission to inspire the world with green solutions and hosting Tour de France just created the perfect platform for us to share our bike culture. Because really it is not only a culture. Danes has loved cycling for many years, but the deciding factor is to make cycling the best, safest, and fastest way to get around. And in Copenhagen it really is,” says Vallentin.
Having the powerful Tour de France brand and mixing it with public backing and huge grassroot initiative and enthusiasm meant that Denmark was painted yellow, and cycling was celebrated and promoted to an extent the city has not experienced before.

Copenhagen is considering what is next
The last two years Copenhagen has hosted major events like Tour de France, EURO2020, WorldPride and the city is getting excited about next year’s BWF Badminton World Championships, where local hero and the world’s number one, Victor Axelsen, can hopefully replicate Jonas Vingegaard and take the trophy.
After that Copenhagen is back on the bike and ready to host the UCI Track World Championship in 2024 and the UCI BMX World Championship in 2025. On top of this, the Danish Capital has its eyes firmly fixed on the 2025 UEFA Women's Championship with a joint Nordic bid, and it is also the ambition to follow up on the success of the Tour de France and host the UCI Road World’s 2029
“We are hopeful that the Nordic focus on female sport, gender rights and hosting inclusive events with great outreach programmes, will help sway the European Football Association,” says Vallentin.

This article was contributed by Wonderful Copenhagen