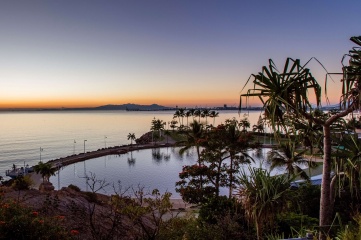 [Source: World Triathlon] Organisers of the World Triathlon Multisport Championships have today announced that the event will be heading to Townsville, Australia, in 2024. The 10-day event will be held in the charming town in North Queensland in 2024, with thousands of athletes from around the world expected to take part.

The World Triathlon Multisport Championships will see duathlon, long distance triathlon, long distance aquabike, aquathlon, cross triathlon and cross duathlon world championship races organized together during a week-long festival. This ground-breaking event now allows for athletes to compete in various multisport races, as opposed to electing only one each season. And participants can even vie for the Multisport Legend, a title reserved for those who compete in four events.

World Triathlon President and IOC member Marisol Casado said that the organisation was looking forward to heading to Townsville in 2024. "We are absolutely delighted to return to Queensland after such a long time without events in Australia, this time for one of our flagship events: the Multisport World Championships in Townsville,” she said. “Over the last years, Australia has become synonymous of triathlon on its multiple variations, and has proved to be a magnificent host for the triathlon family, playing host to some truly memorable performances and great champions, staging races the results of which have helped shape the path of entire seasons.

“Being able to hold these important races in one fantastic location and all under the banner of one festival has proved to be hugely beneficial for athletes, spectators and media alike, allowing the global World Triathlon family the opportunity to gather together for a true celebration of the sport, and we are extremely excited to head to Townsville in 2024,” she said.

“This event is great news for North Queensland tourism operators, accommodation and transport providers, and local retailers,” he said. “It’s also a golden opportunity for competitors and spectators to build extra time into their stay to explore Townsville’s amazing tourism and Indigenous cultural experiences, world-class dining, the reef, and breathtaking tropical islands and rainforests.”

Mayor Jenny Hill said the Townsville City Council and the wider community was looking forward to welcoming the Multisport World Championships to the city.

“Hosting this event is a real coup of Townsville and further reinforces our city’s reputation as the events capital of Northern Australia,” Cr Hill said. “With our beautiful natural environment and ideal weather, I can think of no better place for the world’s best athletes to test their skills and endurance.

“The championships will also provide a platform to promote our city and region to the world, which will boost our tourism industry for years to come.”

Miles Stewart OAM OLY, Triathlon Australia CEO, welcomed news that the event would be held in Townsville in 2024. “This is fantastic news for triathlon and multisport in Australia, and for our members who have been anticipating, and looking forward to racing and officiating at these world championships on home soil,” said Stewart. “We’re expecting our largest Australian representative team on record for Townsville 2024 with seven championships on the schedule from cross-triathlon, aquathlon to long course.

“The festival format will mean athletes can race across multiple disciplines on multiple days, which is really exciting, and will be a great boost for Australian events with athletes racing to qualify for a spot on the team from 2023,” he said. “Australia has some of the best triathlon events in the world, and we can’t wait to welcome the world’s best to Townsville, and continue to build on our legacy of hosting world-class events.

Official dates for the Townsville Multisport World Championships will be announced in the near future.

The World Triathlon Multisport Championships made its debut in the World Triathlon calendar in 2017 in Penticton (Canada), a successful event that was followed by Fyn (Denmark) in 2018 and Pontevedra (Spain) in 2019. After the event being cancelled in 2020 due to the pandemic, in 2021 the races were held in multiple locations (Almere, El Anillo and Aviles). In 2022 the event will travel to Romania and Slovakia, and will return to the original format of all races in one location during a 10-day festival in Ibiza (Spain) in 2023 and Townsville (Australia) in 2024.